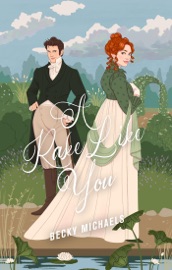 About to turn thirty, Charles Finch finally realizes his luck has run out. He's twenty thousand pounds in debt, his entire family hates him, and the powerful Duke of Rutley is watching his every move. So Charles sets out to do what any handsome but impoverished earl would: find a young lady with an impressive dowry to marry him and replenish his coffers.

Louisa Strickland much prefers managing the successful estate her father left her to the company of society. But now that her younger sister has come of age, Louisa finds herself in Mayfair, forced to protect her family from desperate fortune hunters like her neighbor, Charles Finch. And when Charles sets his sights on Louisa's sister, Louisa will do anything to avert his attention elsewhere.

As Charles and Louisa find themselves rekindling an old friendship that once went up in flames, Charles begins to wonder if there could be something more between them. He only needs to prove he's not the man he once was. But unfortunately for Charles, it will take much more than passionate kisses and giving up brandy to convince independent Louisa to marry a rake like him.