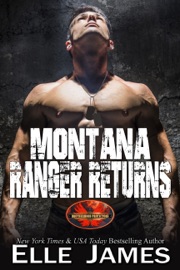 Betrayed by his wife and filled with self-loathing, he joined the Army on his path to self-destruction

Fin McClain left Montana to escape his past. He joined the US Army to fight enemies of his country and his own internal demons in an attempt at redemption or suicide. On a mission in Syria, he fought alongside a woman they called the Angel of Death, a woman as fierce as she was beautiful. Mission complete, he never learned her name or where she was from. Finally coming home to Montana for the first time in years, he’s unsure of his welcome. When he finds an injured woman staggering alongside the road, he’s shocked to discover she’s the woman from Syria. And she has no memory of him or their mission.

She woke in the arms of a stranger…

They called her Jane Doe. Found on a roadside, bruised, bloody and devoid of all memories, she’s desperate to know her real name, where she belongs or how she ended up in the arms of a man who claims he knows her but not her name. With a feeling of impending doom, she struggles to learn the truth about her existence and why she feels compelled to run.

With Fin’s help, Jane recovers from her injuries in time to fight an elusive enemy and discover why she ended up in Fin’s arms and why she finds his damaged soul so compelling.