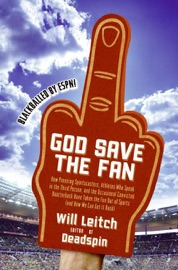 God Save the Fan

Arch and unrepentant, Will Leitch, founding editor of Deadspin.com, is the mouthpiece for all the frustrated fans who just want their games back from big money, bloated egos, and blathering sportscasters. Always a fan first and a sportswriter second, Leitch considers the perfection of fantasy leagues and the meaninglessness of the steroids debate as he exposes Olympic fetishes, parses Shaq's rap attack on Kobe, shares a brew with John Rocker and his surprising girlfriend, and reveals what ESPN and the beer companies really think about you. If you or a fan you love is suffering from a sense of listless dissatisfaction brought on by the leagues and networks, God Save the Fan is your new manifesto.

More by Will Leitch